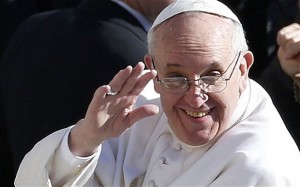 Pope Francis arrives in Saint Peter’s Square for his inaugural mass at the Vatican Photo: REUTERS

Someday Pope Francis will make a visit to the United States. Indianapolis would make a great host city for a papal visit. Here’s why I think Indy would make a good host.

Over the weekend, I participated in a Knights of Columbus Honor Guard at the ordination of three new priests in the Archdiocese of Indianapolis.

While I was sitting there watching the service, my mind started to wander and I started to think of the possibilities of Indianapolis as a host venue.

It was Pole Day out at the Indianapolis Motor Speedway.  This was the first year I’ve not been at the track during the Month of May. The Indianapolis 500 is home to the biggest one-day sporting event in the world. That got me thinking…the IMS would be an awesome venue to host a visit by the pope.

IMS has one of the largest media centers around and the entire facility is wired for TV. Indianapolis handles this event and has all the security plans in place to handle the people and keep them secure.

The track parking lots also have the space required to host thousands of pilgrims who would make the journey to see the Pontiff.

Finally, the racing fan in me would love to see the Popemobile make a lap around the famous 2.5 mile oval, giving everyone in the seating areas a chance to see His Holiness.

Now the odds are it will never happen.  Cities like Washington, NYC, LA and Philadelphia  will land a papal since they have larger Catholic populations and they’re bigger markets.

But who knows, if Indianapolis can host a Super Bowl, we can definitely pull an event like a papal visit.

Probably will never happen, but it was a cool idea.